When I heard about the Minnie Mouse makeover (which also includes Daisy Duck and other characters) by Barney’s and Disney World, I couldn’t help thinking about the day I tried to fly.

I was pre-school-age–too young to read, maybe five–but I could watch TV. I was watching a television commercial where children ate a breakfast cereal called Sugar Jets and flew around like little jet airplanes. That was the 1950s, when cigarettes were still refreshing, and cereals had no need to shy away from openly calling their brand “Sugar this or that.”

My flying plan was just eating the cereal then running and trying to jump into the air. The flying never worked and I gave up (as I recall, I didn’t even like the cereal that much). But I still remember being open to the possibility that I might take off and go zooming around the neighborhood.

I was in just the vulnerable age group that Disney cartoon characters appeal to. The “fashion cartoon” characters Disney is creating to walk the fashion catwalk will be merchandised just as all Disney creations are. These designers created a 5’11” size 0 “Fashion” version of Minnie Mouse, drastically thinned down and elongated in order to “look good” in a Lanvin dress in the Barney’s window this holiday season.

Barney’s chief executive officer Mark Lee expressed his certainty that the “new” Disney characters will bring as much joy to the holiday season as [an earlier collaboration with Lady Gaga] did. Lady Gaga appeals to an older demographic than Minnie Mouse, a group that is a at least  little able to sort out achievable reality from bizarre fantasy. As Lee put it, “The legendary characters and world created by Disney live in the active mind and memory of virtually every citizen of the world.”

The short film centers around Minnie Mouse’s fantasy to be at the Paris shows. There she comes across key Disney characters — Mickey Mouse, Goofy, Daisy Duck, Cruella de Vil, Princess Tiana and Snow White — all decked out in unique designer clothes as they make their way down the runway.

“When we got to the moment when all Disney characters walk on the runway, there was a discussion,” Freedman recalled. “The standard Minnie Mouse will not look so good in a Lanvin dress. There was a real moment of silence, because these characters don’t change. I said, ‘If we’re going to make this work, we have to have a 5-foot-11 Minnie,’ and they agreed. When you see Goofy, Minnie and Mickey, they are runway models.”

More scary pictures at this link.

I agree with Ragen at Dances with Fat. She has organized a petition to shine a spotlight on the dangers in what some (not me!) would call harmless fantasy

In her petition, Ragen points out:

That little girl who is going to become a 5’4″, size 12 woman can’t just become a 5’11”, size 0 woman when she wants to fit into a dress that was designed by someone who couldn’t be bothered to make a dress that looks good on someone who is not a model.

Meanwhile, hospitalizations for eating disorders in children younger than 12 years old rose by 119% from 1999 to 2006 according to a report issued by the American Academy of Pediatrics (AAP) published in the journal Pediatrics.

According to sources sited on the non-profit National Association of Anorexia and Associated Eating Disorders website:
•  47% of girls in 5th-12th grade reported wanting to lose weight because of magazine pictures.
•  69% of girls in 5th-12th grade reported that magazine pictures influenced their idea of a perfect body shape.
•  42% of 1st-3rd grade girls want to be thinner.
•  81% of 10 year olds are afraid of being fat.

Girls have enough pressure to be thin, now the beloved Disney mouse of their childhood has to add to the message that the only good body is a tall, size 0 body? Enough already. Let’s give girls a chance to celebrate the actual bodies they have instead hating them for not fitting into a Lanvin dress. Then maybe enough girls will get together and demand dresses that look good on their actual, non-digitally altered bodies and designers will just have to become talented enough to design a dress that looks good on them. 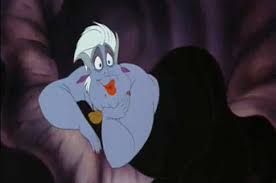 Ursula is based on the “sea witch” character in Hans Christian Andersen’s story “The Little Mermaid”. In the original story, the sea witch is a neutral enabler, but for Disney’s animated adaptation, the character was modified into a full-fledged antagonist and plays a larger role in the overall story. Ursula is a cecaelian sea witch who “helps” unfortunate merfolk to achieve her own goals. Her appearance is of an obese purple-skinned, white-haired female human and from the waist down has black tentacles.

Withoutscene on Bad Ass Fat Ass blogs about how Ursula was inspired by Divine and many are empowered by her fabulous in-your-face fatness.

Myself, I’ve recently renewed my affection for the Fairy Godmother in Cinderella–a rare positive fat Disney character whose cartoon image actually resembles the big beautiful actress who voiced her in the 1950 film, Vera Felton.

No matter how you feel about the magic words (Bibbidi Bobbidi Boo, of course) I can’t help loving the way the unapologetically fat, gray-haired Fairy Godmother swoops around in this clip:

She really can fly!

May all your cartoons lend you power, if not wings!