This is the post that was supposed to go up the Monday after Thanksgiving, one week ago tonight. That’s the night we discovered that the back end of our blog had disappeared (literally into a blank white screen). Our webmaster had a series of mishaps (including illness and power failure) which prevented him from fixing it until today. We didn’t even have any way of letting you know that we couldn’t post. So thanks for your patience! Also, we’ll post even more regularly than usual for the next while, just so no one forgets we’re here. Welcome back to us!

And onto the links I was saving for last week; I’ve accumulated more since, but let’s keep this to a vaguely manageable size. Some of these are a couple of weeks old, but they all feel timely.

Tiffany Mott-Smith went to the Queer Fashion History Symposium, and writes about what wasn’t there:

… panelists and speakers discussed the road of fashion that lead us happy homos to where we are today, erasing all color except to mention Janelle Monae’s tuxedo and Rupaul’s “fascinating” transformation into high femme drag. Then came perhaps the truest heartbreak: the portrayal and iconography of the Dandy as one of white celebrity and wealth. Using none other than Oscar Wilde, we were regaled with tales of Wilde’s commitment to dandy attire and general representations of gay flagging with pops of color in pocket squares and socks or the peacock suit movement of colored suits. We listened to tales of Parisian androgynies in the early 20th century engaging in dapper dykery at bars like La Monacle, rounding out with devotionals of Marlene Dietrich in her Dior suit. 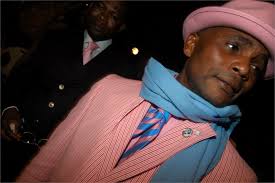 In all, no mention of Ma Rainey, Gladys Bentley, or Josephine Baker who in the early 20th century, and throughout the Harlem Renaissance, were singing jazz, blues, and leading bands in men’s tailcoats, top hats, ties, and cufflinks. There was no mention of the Congolese Sapeurs and flamboyant French- African suit wearers and makers who, since the 18th century, have been creating and maintaining the code of Dandyism. These Afro-Dandies, most of which have survived two brutal and devastating civil wars, use their brightly chic attire and mottos like, “let’s drop our weapons and dress elegantly,” to create a gentile lifestyle of poise and charm.

Vancouver, British Columbia (Canada) is banning doorknobs on all new construction. This is one of the biggest moves towards universal design that we’ve seen on a municipal level:

Tim Stainton from the University of British Columbia School of Social Work says:

Basically, the idea is that you try to make environments that are as universally usable by any part of the population. The old model was adaptation, or adapted design. You took a space and you adapted for use of the person with a disability. What universal design says is let’s turn it around and let’s just build everything so it is as usable by the largest segments of the population as possible.

It’s a truism in the disability community that everything you do for disabled access helps all kinds of groups you weren’t thinking about and didn’t expect. When I read about replacing doorknobs with levers, I think about coming home with heavy groceries and the difference between having to put down my bags to open the door and being able to use my bags to open the door.

Bridget Allen has an extraordinary piece in the Huffington Post on “autism, feminism, and poverty.”

But I do not work. I am autistic, and being the autistic I am means I am real-world, social-model- disabled. I do not work because I cannot. There are a dozen hypothetical ‘what if…’ or ‘should be…’ scenarios in which I could hold down a job, but that is not my reality.

My childhood was infused with a popular feminist theme. I was taught that a Real Woman is financially independent. She doesn’t need a man be it a husband or larger entity (The Man) to support her basic needs or the needs of her offspring. A Real Woman knows children are an accessory to a career, not something one builds a life around. I regularly heard the words “housewife” and “brood mare” used interchangeably. I am loathe to believe this is real feminism, because empowerment that exists on the denigration and neglect of other’s needs empowers no one.

Growing up, I was also told over and over again my worth was tied to doing Great Things. That lesser people lived ordinary lives, and that for me to live an ordinary life would be tantamount to complete failure. In order to be a worthy human, I needed to be financially independent while actively improving society. Nothing less would do.

So do I own my complete failure, or do I redefine what it means to do Great Things? I embrace both, which yields a very messy work in progress.

The dauntless folks at Sociological Images have a whole Pinterest board of images that show how “people” doesn’t include “women.”

We try to post regularly on and about Transgender Day of Remembrance, but this year we didn’t. So we’d especially like to honor Janet Mock’s post on why she chose silence on that day:

Today, I am refreshed after three days of quiet reflection, and I am ready to use my voice again.

I realize it’s a state of emergency for trans women and trans feminine folk of color, and I am dedicated to raising awareness to the plight of my sisters and siblings, yet I also know that the intense focus on the publicizing of murder, violence, death and victimhood becomes a self-fulfilling prophecy for the young women I share space with. I’ve borne witness to young women and girls nonchalantly telling me that they’re not going to make it to 30 (a benchmark I just surpassed) so they’re going to “get their life” at all costs. This “get my life” mentality breeds an urgency in my younger sisters, pushing them to live a hard and fast life with little protections and resources, with little care or regard.

Finally, we give you Vanessa VanDyke, who (small victories) isn’t going to be expelled for her hair, but is going to be required to wear it the school’s way: